Hi there from Buddy for this month’s news,

We heard from readers who commented about the article on foods that are good for snacking and foods we dogs and cats should not eat. Yes, we missed a few important ones:

If you run into a little tummy trouble, pumpkin will help to sooth that ache.  Try to make sure it’s as natural as possible with no preservatives to cause any more upset.  Check out this web site for tips on cat and dog food problems.  www.aspcabehavior.org

Thanks for your letters, we’ll always answer what we can!

I’ve been on my Human’s computer again, after she and my store owner human had an agreeable but noisy discussion about a new law affecting us pets. Even Taylor and I joined in the discussion.

California has a new law requiring pet stores to sell ONLY rescue/shelter organization dogs, cats & rabbits. The law bans the sale of “puppy mill” animals, but that also includes animals from professional, licensed, and ethical commercial breeders. Plus, the stores will not be required to warranty the animals’ health. (It passed the legislature Oct 13, 2017 and will go into effect January 2019.)

Read on… you’ll see why we in Florida should care!

Those FOR the new law

The lawmakers agreed that, “In addition to saving animal life, AB 485 is also good for taxpayers. Californians spend more than $250 million a year to house and euthanize animals in our shelters. Protecting the pets that make our house a home is an effort that makes us all proud.” Assemblyman Patrick O’Donnell.

“By prohibiting the sale of commercially bred dogs and cats in pet stores, California will cut off the supply of inhumanely bred puppies into communities across the state, and prevent consumers from unwittingly supporting this cruel industry,” Matt Bershadker, president and CEO of the ASPCA told PEOPLE in a statement.

Those AGAINST the new law

“The enactment of AB485 represents a troublesome new reality for California’s pet owners. Their choices will be limited to pets from unknown sources, with unsubstantiated health backgrounds, and without consumer protections.”

Representing those against the law, (PIJAC, California pet stores, the American Kennel Club and other groups), there are 4 main criticisms:

Why Should We Care?

Rescues and shelters do admirable work. But they cannot take the place of pet stores — the two entities take care of different pets and frequently serve different pet lovers.

It remains to be seen how well this new law works! It deserves attention, as it could find its way into law in additional states, including Florida.

What are your thoughts?

Q: What do you call a Dog Magician?
A: a Labracadabrador 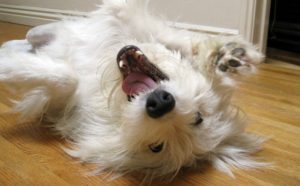 2. When you get here, call us and we will bring your order out.

A Note from my Human:

Cats n Dogs in Port Charlotte, FL sells many hard-to-find, brand name pet foods and treats. There are lots of in-house Sale items too! Open 7-days a week. Check out the website for details.